How Much Caffeine is in One Coffee Bean? Know The Counts Here

Coffee is an integral part of morning routines for most people. But, while some have the time to relish every sip, others drink coffee in a rush. Thanks to the caffeine, it gives the much-needed rush of energy to get started with the day.

There’s a lot more to coffee than just caffeinated and decaf. Let’s see how much caffeine is in one coffee bean.

The amount of caffeine differs in the varieties of coffee beans. Coffee cherries (including the bean, skin, and pulp) have higher caffeine content, of which about 40% is lost in the processing.

Would you believe that there are over 100 coffee plant species? We’re accustomed to the 2 varieties that make up about 98% of the coffee grown worldwide – Robusta and Arabica.

The caffeine content in a single Arabica coffee bean is about 1.6 milligrams, while it’s 2.9 milligrams for a single Robusta coffee bean. An average weight of 132mg of a single roasted coffee bean makes up 2.2% and 1.2% of the total bean weight for Robusta and Arabica, respectively.

Green beans have a lower caffeine content than roasted coffee beans. This is because the roasting process interferes with the density and moisture content of the beans. So while the roasted beans are lighter, they have slightly more caffeine.

If you’re wondering how much caffeine is in one coffee bean after the roasting process: A roasted Arabica bean has about 6mg of caffeine, and a roasted Robusta bean has about 10mg.

Contrary to popular myth, light and dark roast beans have almost similar amounts of caffeine by weight. However, by the scoop, dark roast coffee beans are lighter and have less mass than light roast; they have slightly less caffeine too.

While the dark roast beans may provide a stronger flavor to your coffee, it has nothing to do with the amount of caffeine in your brew.

The caffeine content of chocolate-coated coffee beans is higher than regular coffee beans since the chocolate coating also contains caffeine.

Typically, dark chocolate coating is more common, and it contains more caffeine than light or milk chocolate. So it might make you wonder how much caffeine is in one coffee bean that’s covered with chocolate.

A single chocolate-coated espresso bean contains close to 12mg of caffeine, including the caffeine in the chocolate coating. About 7-10 chocolate-covered beans will almost equal the average caffeine levels in 8 oz of coffee, which is around 96mg.

The amount of caffeine is at least 97% less in decaffeinated coffee beans than in regular coffee. Decaffeination takes place with raw green beans before the roasting process.

Here are the factors that affect the caffeine content in beans:

If you use instant coffee regularly for a quick cuppa Joe, you must know that it isn’t made of freshly ground coffee beans. Instead, coffee is brewed and dehydrated to remove the moisture. A teaspoon of instant coffee has about 28.3 milligrams of caffeine.

Coffee beans – raw or roasted are edible indeed. However, owing to the caffeine concentrations, consumption must be in moderation.

If you’re wondering whether it’s healthy to eat coffee beans, it is, although eating too many at a time could have side effects too. Eating coffee beans provides the same benefits as drinking coffee.

The next big question that pops up is: how many coffee beans can you eat? Again, it all comes down to the caffeine content. As long as you’re not sensitive to caffeine or pregnant, consuming about 20 – 30 whole coffee beans or 400mg of caffeine per day is safe but not at a stretch.

If you’re making whole bean coffee, that would be about 7-10 beans per serving.

While you could eat raw coffee beans, not many people would enjoy the tough, chewy, and high acidic content of the raw, green coffee beans. If you’re looking for a caffeine fix, chocolate-covered coffee beans are a great option.

Snacking on coffee beans has some potential caffeine benefits:

The negative effects of too much caffeine intake include:

Now that you’re aware of how much caffeine is in one coffee bean, you’ll be able to decide better on how many you’ll need to brew a cup or munch on as is. 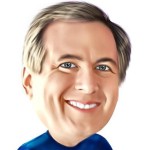 Jeff Stone
Jeff is a coffee aficionado. He loves a couple cups of joe first thing in the morning. He like trying out new grounds and gear and then writes about it here. When he is not sipping java, he is usually writing it for his clients as a software engineer.

Hero-Coffee.com is a participant in the Amazon Services LLC Associates Program, an affiliate advertising program designed to provide a means for sites to earn advertising fees by advertising and linking to Amazon.com. Keep in mind that we may receive commissions when you click our links and make purchases. However, this does not impact our reviews and comparisons. We try our best to keep things fair and balanced, in order to help you make the best choice for you.